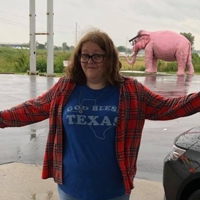 Samantha has been telling stories for her entire life. No, really. In kindergarten she won the best story teller award, and one can only imagine what those tall tales were like. Ask her sometime about The Magic Pencil, one of the first stories she ever put down on paper and that she still likes to pull out for a laugh now and then. It is unintentionally hilarious, truly.

While pursuing her degree in Administration of Justice she finished her first full length novel, Endless Numbered Days, which was published by Martin Sister’s Publishing in 2014. She has since finished two other novels which are awaiting publication, and has a whole host of things in the pipeline.

Besides writing she is an avid reader and book reviewer, a National Parks enthusiast, frequent traveler, and goes to her day job six days a week. She has three fur babies that take up 90% of her time: a 100+ pound German Shepherd lovingly named Ronan Lynch after her favorite literary character, a beagle named Lord Vader (a girl) after her all time favorite baddie, and a cat named Kitty Russell after the iconic Gunsmoke saloon owner. She loves music, going to the movies, D&D, and anything involving horror. She can’t write horror to save her life, but man does she love it!